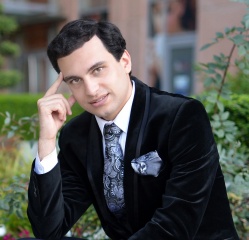 Sipan Olah opera tenor, pianist, theorist and conductor.
Artistic Director and Conductor of the Armenian Klingen Choir and Cultural Association in London.
Sipan Olah is a London-based award-winning opera singer (tenor), pianist, song editor, theorist and choir conductor. He graduated from the Yerevan Komitas State Conservatory (Armenia), being awarded an MA degree with honours. Sipan further developed his conducting techniques with professor Davit Ghazaryan (Yerevan). He singing professors where bass Barsegh Tumanyan (Yerevan) and tenor Philip Doghan at the Royal Academy of Music, London.
In 2003, Sipan received a scholarship from the Vladimir Spivakov Foundation (which supports highly talented young musicians). In 2007, he won the Gold Medal in the Republic of Armenia Arts Festival. From 2007 to 2010, he worked as a tenor vocalist and conductor with the State Vocal Quartet of the Armenian Ministry of Culture. From 2011 to 2013, Sipan was a member of the London Philharmonic Choir, performing at the Royal Albert Hall and Royal Festival Hall. From 2013 to 2016, he was appointed Artistic Director of the Tekeyan Cultural Association. In 2014, he was awarded the Komitas Medal by the Music Union of Armenia. Based in London, the Klingen Choir and Cultural Association was founded by Sipan Olah in 2013 which currently has planned concert and events until 2020.
Over the years, Sipan has conducted choir parts from Handel’s Messiah and Haydn’s The Creation, and Bruckner’s Te Deum, in Armenia and Ukraine. Sipan’s solo singing performances in Armenia, Austria, Germany, Russia, Ukraine, Malta and the UK have been highly appreciated by both the general public and the media. Of particular note are his performances as Jupiter and Grimaldo in Handel’s operas Semele and Rodelinda, his recital in Ealing Town Hall, London in 2016, as well as his concert touring year in the Republic of Malta where he performed in 40 concerts and 3 operas. During March of 2019 he has performed in St John’s Smith Square as a conductor and a solo singer and has had a vocal recital in St Cuthbert’s church. In 2014 Sipan Olah was the first conductor to present Armenian pieces by Komitas to Welsh audience with his choir, followed by another similar concert in 2018 organised by the Arts Council of Malta, this time conducting a Maltese choir which presented Armenian choir pieces by Komitas to Maltese audience for the first time, both being historical events for all countries involved.
His principal concert repertoire comprises a wide variety of pieces, ranging from Middle-age troubadour songs, Baroque arias and ariettas, arias and songs from the Classical and Romantic periods to contemporary pieces in different languages by numerous composers.
He has been an experienced music teacher for more than 15 years working with students from ages 6 and above in Vocal singing, Piano and Music theory.

"Musica Nova is wonderful school, organised by a brilliant musician Eugenia Terentieva. Thank you very much for your magic, professionalism and I hope that the New Year will bring many happy returns to your school."